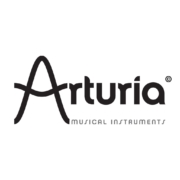 In V Collection 8, Arturia has included numerous updates, including reworked Stage 73 and Jup-8 instruments. You also get an overhauled Analog Lab, which boasts an improved interface, tweaked instrument and preset browsing, enhanced effects performance, and a bevy of Arturia-curated presets. Hundreds of new V Collection 8-exclusive presets are on tap for every instrument, both old and new. The bundle’s overhauled browsing interface offers streamlined, focused navigation, while new control macros for every instrument make deep-diving easy and fun. Finally, refreshed in-app tutorials get you up and running fast. Whether you’re a modern music producer, synth aficionado, or composer, Arturia V Collection 8 is a must-have.We’ve found that it offers an elevated musical experience — it’s a real wellspring of inspiration!

A patch-pin modular sensation, the quirky British “silver machine” put a new spin on modular synthesis. New for V Collection 7, it has been reborn with expanded modulations, powerful effects, an updated sequencer, with the ability to group pins for total control.

Probably the most famous synth in history, this monosynth is legendary for its fat, warm basses and leads. We partnered with Bob Moog himself to bring this legend to a new generation of musicians, with new features that were impossible in the 70s.

An analog polysynth legend, the Matrix-12 featured the big brassy Oberheim sound, powered by unparalleled matrix modulation and 15-mode filters. We’ve expanded it with even more mod sources and a 27 x 47 matrix.

Combining the analog Prophet 5 with the digital Prophet VS, this reimagined synth gives you the iconic poly-subtractive synth sound that defined the 70s and 80s. We’ve even added a hybrid mode to combine the best of both instruments.

Two synths in one, the original was famous for rich complex sonic textures. Toto, Vangelis, ELO, and Stevie Wonder, and now it’s your turn. Our update features modulation, multi-timbral voicing, an arpeggiator, effects and preset morphing.

The sound designer’s secret weapon, our reborn Tom Oberheim classic brings that analog vital tone to your setup. We’ve also updated it with 8 voices of unique polyphony, as well as a new modulation matrix, noise, sub-oscillator, arpeggiator and portamento.

The Arturia Jup-8 V puts the storied synth of the ’80s into your hands. Powered by Arturia’s TAE engine, the Jup-8 V features more than 400 high-quality presets, an advanced step sequencer, analog and digital effects, and a Galaxy module that lets you program two LFOs at once. External MIDI controller setup is quick and easy, and the Arturia Jup-8 V is fully compatible with Mac and Windows, supporting VST, AU, AAX, and also standalone operation. If you’ve lusted after the original synth, or you’re simply looking for an awesome software synth to bring a little bit of ’80s magic into your sound, you’ll love Arturia’s Jup-8 V.

From clear bright leads to the voice of R2D2. Its semi-modular design featured connections you could override with patch cords, great for learning and exploring synthesis. Our version has tons of enhancements: polyphony, tracking generator modules, a sequencer, and effects.

The budget synth that became a legend in its own right. The instrument that brought the digital synth revolution to the masses with its razor sharp phase distortion sound. Now beefed up as software, with added modulations and awesome effects!

If you’ve ever listened to the radio, watched a film, or owned any 80s records, you’ll have heard the DX-7. We simplified the way you program it, and expanded it with a mod matrix, custom envelopes, waveforms, a 2nd LFO, effects, and more.

We partnered with original designer Cameron Jones to faithfully rebuild his brainchild synth in software. The elite digital synthesizer that powered some of the biggest hits and film soundtracks of the early ‘80s is now yours to control, with expanded features and resynthesis.

The mother of all samplers, and a groundbreaking additive synth, the Fairlight original redefined pop music. Our recreation gives you 10 multitimbral, polyphonic slots to design your sound, real-time waveform shaping, effects, sequencer, and even a brand new “Spectral” synth.

The original instrument redefined what keyboard players could do, unlocking the doors to orchestral and choral sounds at the touch of a key. Our reborn Mellotron features all original tapes, as well as the ability to play your own samples with authentic tape emulation.

The king of electronic organs, the rich sounding B-3 has been a staple of jazz, gospel, hard rock and reggae for over a half century. Our faithful homage includes a rotary speaker, as well as drawbar modulation for new animated and syncopated effects.

When the physical modeling gurus at Arturia decided to capture the sound of the Rhodes electric piano in its prime, they absolutely nailed it with the Stage-73 V electric piano virtual instrument. Stage-73 V captures three classic mid-’70s Rhodes models in stunning detail, but that’s just the beginning. You can go under the hood to tweak parameters such as hammer hardness, tone bar resonance, and pickup alignment, offering a custom shop worth of mods. Of course, it wouldn’t be an authentic Rhodes sound without the popular vintage guitar amp to go with it, so Arturia modeled that as well, along with a collection of classic stompbox effects. For anyone who loves classic EPs, the Stage-73 V is an aural treat like no other.

A collection of world-class pianos and quirky, rare instruments brought to life through physical modelling. We measured the precise tonal response of every component, so you can enjoy and personalize living, breathing pianos, rendered in software. No samples here!

One of the most loved, influential electric keyboards of all time, this funky, energetic tone is now available in a physically modelled software instrument, complete with customizable setup, and classic amp and effects combos.

A driven transistor organ was the backbone of any 60s hits, and it has been bubbling away in upbeat genres ever since. We added some cool synth functionality to this classic too, like user-definable waveforms, trem sync, envelopes and effects.

Bright and tight, the original instrument wash much-loved by funk and rock players for its punch and clarity. Our recreation is a perfect physical model, remade in software. We’ve added lots of tone-shaping options, guitar amp, rotary speaker and effects boxes.

Last, but by no means least, the final instrument of V Collection 7 isn’t a classic synth, an organ, piano, sampler, or tape machine. It’s all of them combined. With V Collection 7, Analog Lab 4 gives you instant access to over 8000 preset V Collection sounds in one place, with quick-access controls, smart tag-based browsing, and loads of inspiring features.

Synthesizers exploded in the 1980s, and the OB-Xa was right there in the thick of it with its distinctive fat, aggressive-sounding growl. The Arturia OB-Xa V is a spot-on emulation of that analog classic, and it includes a few new tricks as well. This virtual instrument boasts 16-note polyphony — enough for large arrangements. And its stereo spread feature is as immersive as all get out. Its built-in arpeggiator is tailor-made for creating patterns and melodies, while an ultra-flexible LFO injects your sound with movement and excitement. You’ll dig all the sound-shaping features in this VI’s oscillators section, while a bevy of onboard effects provides access to a myriad of colorful sonic textures. Complete with 400-plus presets to get you started, Arturia’s OB-Xa V puts the sound of a legendary analog synthesizer right at your fingertips.

Arturia’s Jun-6 V re-creates the DCO-fueled sound and legendary performance of a classic 1980s polysynth. Fire up Jun-6, and you’ll be greeted by the colossal sound that gained favor with A-ha, Billy Idol, John Foxx, Eurythmics, Berlin, Cyndi Lauper, A Flock of Seagulls, Wham!, and many other chart-topping artists during the synth pop and new wave eras. Jun-6 includes its hardware predecessor’s world-renowned ensemble effects, as well as its mind-bending arpeggiator. Best of all, this state-of-the-art virtual instrument has been optimized and enhanced to meet the demands of modern synth-based artists.

Patterned after the iconic 16-band vocoder of yesteryear, Vocoder V ups the ante with advanced synthesis, sampling, and modulation capabilities. This VI is your secret weapon for those elusive Daft Punk-esque robotic vocal effects. That said, Vocoder V also has a harmonic-infused voice that’s all its own, churning out cutting-edge formant textures that are guaranteed to elicit a sly smile from anyone who appreciates the attention-grabbing vocal shapeshifting sound that predated Auto-Tune-style effects. With Vocoder V in your toolbox, achieving Kraftwerk- and Herbie Hancock-style vocal effects will be easier than ever.

Looking for a down-and-dirty lo-fi sampler? The search stops with the Emulator II V. Inspired by a world-famous ’80s-era multitimbral sampling icon, this virtual instrument delivers a familiar old-school sound — 8-bit vintage digital — at its finest. If you dig classic Depeche Mode, Pet Shop Boys, New Order, and Nine Inch Nails, you’ll appreciate the delightfully flawed digital grit that you can coax out of Emulator II V. Anyone who’s chasing the sound of the synth pop era needs Emulator II V in their library — period.