The Adam Audio A77X Studio Monitor adds to the AX-Series as a unique model because its power and radiation characteristics allow it to be used as both a nearfield and midfield monitor. It represents a particularly attractive entry-level model for midfield monitoring which offers transparent reproduction of higher frequencies, clear mids and an excellent transient response… 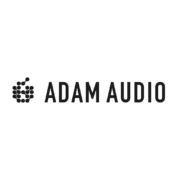 With power and dispersion characteristics that allow use as both a nearfield and a midfield monitor, the Adam Audio A77X Studio Monitor combines all of the technical innovations in the AX range. An active horizontal 3-way studio monitor, the A77X provides an attractive entree into midfield monitoring with transparent high-frequency reproduction, clear midrange, and superior transient response. The A77X’s large, front-baffle bass reflex ports are precisely matched with the bass/midrange drivers, giving the speaker powerful, yet controlled low-end punch. Each of the system’s two woofers is each driven by a 100W PWM amplifier; which, in combination with the 50W Class AB tweeter amp, enables a pair of A77Xs to achieve an impressive maximum SPL of 122dB at one meter. Engineered in Berlin to the strictest tolerances, ADAM’s AX series monitors feature cutting-edge technology, including the company’s renowned, handcrafted X-ART accelerated ribbon tweeter. With its compelling price/performance ratio, the A77X brings ADAM Audio’s world-class monitor performance to commercial recording and broadcast facilities and well-equipped home studios alike.

The drivers in ADAM Audio studio monitors benefit from years of in-house research and development and take advantage of the latest advances in technology and materials science. The two carbon/Rohacell/glass fiber bass/midrange drivers in the A77X are engineered to deliver optimized low-frequency reproduction with extended dynamic range and freedom from coloration. They incorporate a rigid, yet low-mass honeycomb driver cone; a highly efficient magnet assembly and precisely aligned voice coil; and an optimized driver chassis/basket design. The bass drivers are integrated into a unique crossover network where both woofers are active up to 400Hz, where one of them rolls off and the other carries the midrange until it crosses over to the tweeter at 3kHz, thus preventing phase cancellation in the critical midrange. Because of this novel arrangement, there are mirror-imaged Left and Right versions of the A77X (A77XA and A77XB; available separately). The A77X’s 7″ woofers extend response down to 38Hz, making the speaker a suitable choice for nearfield and midfield monitoring in small-to-midsized control rooms.

From its 1999 launch in Berlin, ADAM Audio has built a solid reputation among the pro audio cognoscente. We know that a superior speaker system has superior components, and this is one area where the company has a distinct edge. With years of R&D behind each proprietary driver, ADAM Audio’s custom driver technology expresses itself in breakthroughs such as their X-ART (eXtended Accelerating Ribbon Technology) tweeter, which is based on a groundbreaking 1960s invention, the Heil Air Motion Transformer — and in fact, was the main impetus for the formation of ADAM Audio. The X-ART tweeter became the key to ADAM’s signature transparent, high-definition sound; and the core development of ADAM’s proprietary designs going forward. Embracing, exploiting, and working with modern materials has allowed ADAM Audio to formulate loudspeaker components that continually elevate the state of the art in studio monitor design. Materials such as rare-earth magnets and high-strength diaphragm foils have increased reliability, enhanced performance, and made possible new driver geometry. As compared with conventional driver technology, Adam drivers deliver optimized radiation characteristics, lower distortion, and higher efficiency. Along with installations in a growing number of top studios, ADAM Audio’s monitor range has garnered rave reviews from audio experts and recording engineers worldwide. If you’re considering an upgrade to world-class monitoring, you’ll be in good company with ADAM Audio monitors.